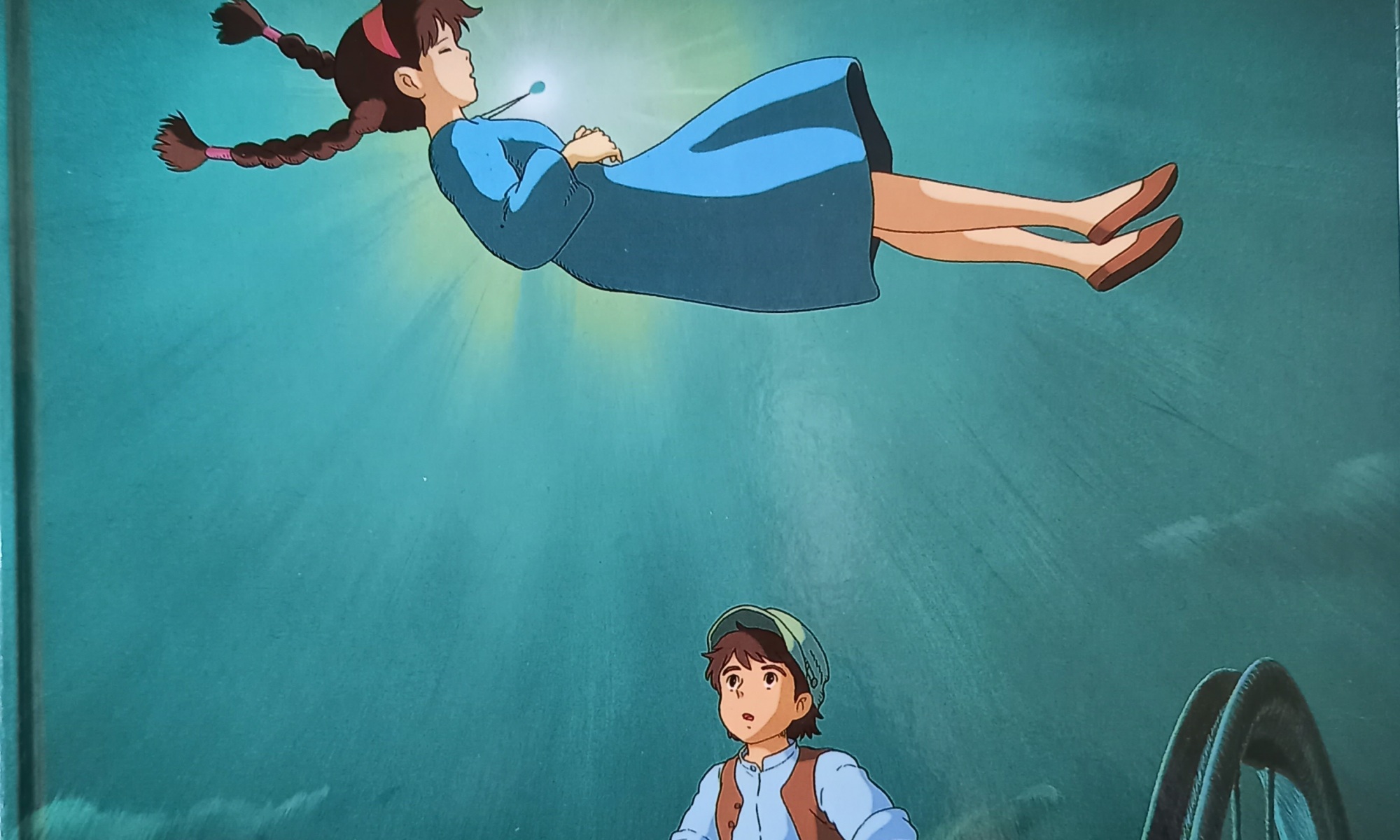 Once again, I’m afraid the next film review has been delayed – my apologies. Work on it is progressing slowly, but I wanted to make sure I got something out before the end of the month, so I thought a book review would be the best way to go. About half of the remaining books in my collection are to do with Studio Ghibli, so I’ll start with those and save the books about unreviewed works for later.

It makes sense to begin with The Art of the Castle in the Sky, which covers the making of the first true Ghibli feature. Like the rest of the Studio Ghibli Library, this is a handsome hardback volume, printed on glossy, high-quality paper and featuring a large shot of the moment Pazu first sees Sheeta on its cover (an interesting choice, as many of the other Ghibli art books have a lot of white space on their covers). I prefer this portrait format to the landscape usually used for modern Disney and Pixar art books, and while I don’t own the whole collection, I would say these are some of the most attractively designed art books available outside of the classic Hyperion line.

The book opens with director Hayao Miyazaki’s original proposal for the film from 1984, which includes various possible titles (most of them very wordy), the goal of the project, an outline of the story and the setting. Then we have a lengthy introduction from Osamu Kameyama of the Animage Editorial Division, which details how the idea for the film came about. It was a very busy time for Miyazaki in the mid-eighties, in between the success of Nausicaä and the foundation of Studio Ghibli, but in characteristic fashion he did not take much of a break between projects. Although he was considering multiple projects for his next film – most of which did eventually get made – he ultimately settled on Castle in the Sky, which he planned as an old-school adventure aimed at a younger audience than Nausicaä; perhaps he felt like a change of pace, as making this film gave him some time off from working on the Nausicaä manga. 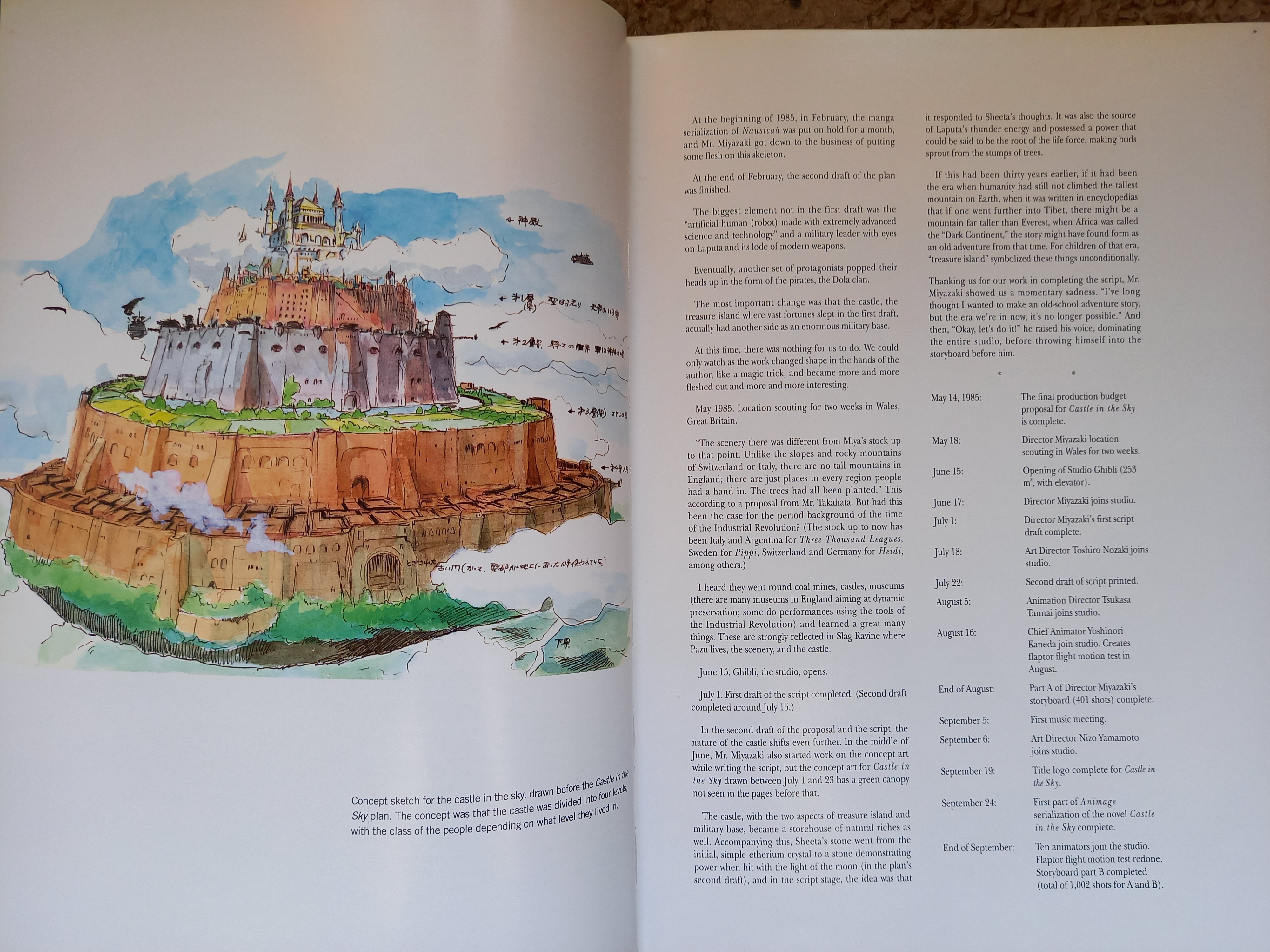 Just as Disney artists were beginning to do for their films, Miyazaki began by taking a two-week location scouting trip to Wales for inspiration in May of 1985, a month after which his new studio was officially founded. After that, it was time to start production. Kameyama wraps up his intro with a handy month-by-month breakdown of the production process from there, ending with the film’s debut in August of 1986, and looking at it, I honestly don’t know how Miyazaki managed to fit it all in. Ghibli’s turnaround time back then was astonishing, especially considering the lack of digital technology to speed up the process – traditional animated films in the west typically took around three years to complete in those days, but Miyazaki was pumping them out in just one.

After the intro, the bulk of the book consists of a collection of concept art, cels and sketches, arranged in story order and accompanied by notes from Miyazaki, with some further technical explanations of elements like the lighting, animation and special effects from Tsutomu Iida of Oh! Pro Office. (The first page also contains three sketches of a prologue that was abandoned during production.) This format is typical of the Ghibli Library series, and while the text may be a bit scanty compared to what you get in a typical Disney art book, what’s there still offers a fascinating insight into Miyazaki’s thought process on individual scenes and elements, as we are walked through the entire story from beginning to end. Small details that you might never have noticed while watching were agonised over, with the animation of the pirates’ flaptors alone taking up several months. 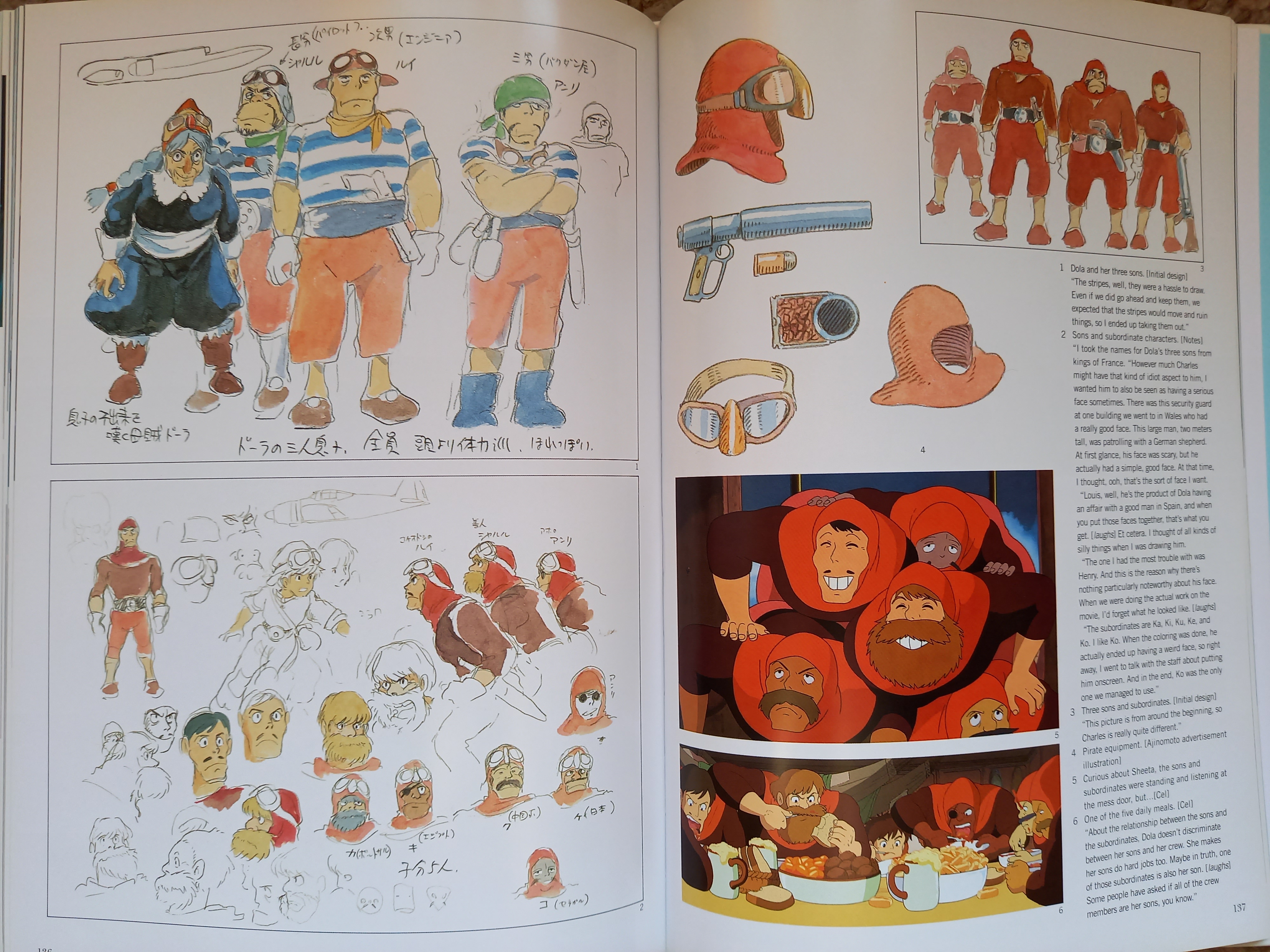 At the back of the book, we have the complete screenplay for the film’s English dub (presumably the original Japanese edition contains the Japanese script) and the theatrical poster, followed by some film credits and the lyrics to Azumi Inoue’s theme Kimi wo Nosete (Carrying You), in both English and Japanese. I must admit, I’m not entirely sure why the screenplay is included; do some readers like to follow along with it as they watch the film? I’ve criticised certain art books in the past for relying too heavily on finished cels and the same argument applies here – personally, I don’t buy these books just to see the film recreated exactly on the page. What I want is to learn more about how they were made, to see the early ideas and concepts that evolved into the story I love, to hear tales from the creators about the trials and tribulations of production. If I wanted to watch the film, I could just… you know, watch the film. Still, it’s not like having the screenplay detracts from the book; it just might have been nice to devote those pages to a bit more concept art or an interview.

The Ghibli art books as a set are beautifully produced and neatly designed, packed with delicious artwork and lush, colourful backgrounds, and while some of them can be a bit light on actual information, I’d say this particular one has enough detail on the production to satisfy most fans. The English translation was only released a few years ago, so I’m hoping that they’ll eventually get around to making translations of the books on Isao Takahata’s films too – I’m dying to add them to my collection.

Thank you so much for reading, and my apologies once again for falling behind schedule with The Incredibles. It’s especially embarrassing because I’ve just had a week off work, but because it was my first proper break in two months and I’ve been working like a dog throughout that time, I ended up procrastinating like the devil the whole week. Not that I’m making excuses; I think I just needed the break more than I realised and, much as I love to write, it’s still a lot of work. The Incredibles will be my priority as we head into October and should be coming out soon, after which I’ll get onto Avatar and complete the First Thoughts series. Beyond that, I won’t make any promises about dates, because I’m potentially about to get even busier at work and my schedule will probably be thrown out the window. Just rest assured that I will always put out at least one post a month, even if it is only a book review – I have another four Ghibli art books to go, so please check in again soon for those! Until next time, take care and staaay animated!

Buy it on Amazon:

2 Replies to “Book Review: The Art of Castle in the Sky”